A Cambridge Independent Press article of 1855 mentioned that Camping Close (a pasture belonging to James Northfield behind 40-46 Royston Rd) used to be used for Shrove Tuesday feasts, for children’s games, but also to listen to the ‘ranters’. Who were these? Helen Greene, in her 1937 book, mentioned Mr Northfield let Camping Close to the Methodists for their Camp Meetings. It may be that outdoor preachers were often given the name ‘ranters’, perhaps because of their unbridled enthusiasms and ‘exhibitionist’ style of preaching, which contrasted with the established C of E style at the time.

Apparently, Methodists originally got their name when some dissatisfied Church of England preachers (‘Dissenters’) started some new methods of preaching. We know (from a History of the Harston Baptist Church 1786-1986) that this happened in the second half of the 18th century in Harston. Important and high-profile Dissenters such John Wesley and John Berridge were recorded preaching here, the former a key founder of Methodism, in 1761 and 1762. The latter after being educated in Cambridge University, was by 1758 preaching regularly in several South Cambs villages. He first preached at Harston in Jul 1759 at an open air meeting to a very large congregation. In 1764 he fitted up a Harston barn where a local congregation would gather for their meetings.
In Jul 1778 Thomas Wale, Lord of Harston Manor, wrote in his pocket book that members of his family went over to Harston and heard his niece Elizabeth Hurrell preach in a barn ‘a sermon of her own, three quarters of an hour long, which she performed with great wonder and praise to an extra full congregation’. 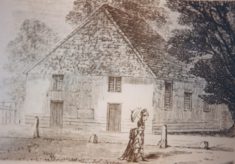 Whereas in Haslingfield new methods of preaching led to a Methodist church being started, in Harston the church formed in 1785 was probably initially an Independent or Congregational one, later known as Harston Baptist Church. In 1788 preaching transferred to the barn of Mrs Swann. Then the congregation raised sufficient funds to buy Mr Swan Wallis’ land in the High St for a graveyard and new Baptist chapel. This was erected in 1799 (pictured) during George Compton’s (1791-1817) ministry. The present Baptist Chapel building replaced it in 1870-71.