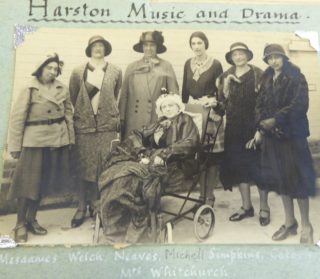 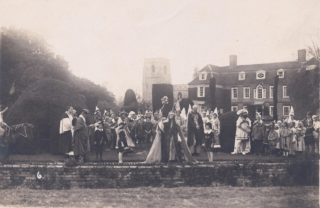 Although an amateur dramatic performance entitled ‘Meg’s Diversion’ took place in Mr Hurrell’s barn in May 1900 in aid of Addenbrooke’s Hospital the ‘agreeable pastime of play-acting’ appears to have gained momentum in Harston soon after the Women’s Institute was formed in 1920. WI meetings’ half hour of entertainment included charades and short plays. The Cambridge Chronicle reported on 29 Sep 1920 that “Weaving Cottage (owned by Helen Greene) had an iron building in the garden, where rehearsals took place for the Harston Dramatic Society, whose work at present is to organise entertainments in aid of a village hall”.

In December 1920 a Harston nativity play- ‘The Shepherds of Bethlehem’ – was produced at Harston House in The Old Weaving Room. The play, with singing and organ playing, was by Miss Lucy Clifford of Cambridge, with the prologue written and recited by Miss Mary Greene who also painted the scenery. Mr F H Lennard was the stage manager. Most of the Company belonged to Harston, including Mr Townsend, Mr E Michell, Miss Dorothy Bliss, Miss Cecily Smith, Miss K Hurrell, Mr & Mrs Lamblin Smith, Mrs Phillips, Mr John Bishop and Mr Royston. Helen and Mary Greene continued to organise and produce further plays and pageants in 1920s in Mr Rowley’s Harston Manor grounds in aid of village hall funds with virtually all the village taking part or attending as well as attracting others from further afield.

1927 WI minutes note the success of Harston in a WI Drama competition at a Cambridge theatre with many members signing up for drama and singing classes in 1928. In 1933 Mrs Lennard announced the WI drama competition results with the trophy passed around for the two competition plays Mr Lennard produced. Mary Askham (B:1930) remembered The Lennards had a lovely gallery in their house (53 High St) where people, including Mary, could practise some amateur acting. 1937 Village Hall minutes record Mr Lennard in charge of the Harston Players but the group probably ended in WW2 when the army took over the hall.

Janet Bennett (nee Hill) remembers her parents took part in plays by the Harston Players which newspapers record as starting in 1949. In the April 1952 National Festival of Community Drama in Fulbourn, Cambridge they entered two one-act plays. ‘A Matter of Fact’ and ‘Wedding at Pemberley’ were produced by Miss Harding and Miss B Kendon. In Nov 1952 Harston Players presented two one act plays (Mr Samson & Hullabaloo) in Harston Village Hall where ‘great advances in lighting, production, acting and in the days chosen were noticed’.  The April 1953 production, ‘A Quiet Wedding’, a comedy in three acts, involved more men with the headmaster Peter Shoote playing alongside Val Joslin. Dec 1953 ‘The Hollow’ was followed by ‘Quiet Weekend’ in April 1954. We don’t know when this group stopped performing.