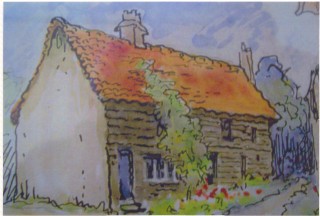 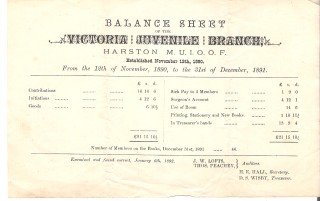 When looking at some old documents belonging to the Village Hall some members of the Harston Local History Group came across an 1890 simple financial statement for the Victoria Juvenile Branch of the Oddfellows. It appears they ran an insurance scheme that gave many locals, who paid in, medical benefits- such as the ability to see the nominated doctor for free. (Until the 1940s doctor and medicine costs were very high as there was no National Health Service). Also, if members were unable to work they were given some financial support and sometimes loans were given, for example, to help buy/start a business. The Juvenile Branch appears to have been started in 1890 and by 1891 had 46 members, with sick pay that year being paid to 4 persons at a total cost of £1, 9 shillings and surgeon costs of £4 and 12 shillings.

From the present Oddfellows Society archive records it shows in 1870 the Oddfellows Harston Victoria branch meeting at the Green Man every 4th Wed (run by T.G. Hoy). In 1926 it met in the Swan Inn every 4th Tuesday, run by Mr Ilsley (from 1925-37) who also ran the Post Office in Royston Rd. The Swan Inn by the Green was burnt down in 1928 so meetings moved back to the Green Man clubhouse. It’s membership in the 1930s was about 350 adults with an average age of 40, with its annual funds around £7,000, quite a lot in those days.

Memories of the Oddfellows

Joyce Carter nee Pluck who worked in the Royston Rd PO 1941-3 remembers her dad and siblings, but not her mum covered by this. She remembers a smartly dressed Mr Northrop, who lived in Green Man Lane, collected the money. Kath Rayner recalls her father was a member but her mother paid into the Foresters – a similar scheme – for the children. However, her father paid into the Oddfellows for Kath once she left school and started work in 1939.

Many older Harston residents remember the various groups who used the Oddfellows Hall behind the Green Man (Hairs and Graces today). Fred Rayner remembered going to scouts there in 1937, climbing up a rope ladder into the Loft and the door had a Lion on it- his pack symbol. The hall could also be hired for special events. Kath Rayner’s Uncle Bill used to play darts matches at the Oddfellows and won a clock. In 1948, Kath worked at Pyes who had moved into the Oddfellows Hall for a while until they moved to Cambridge. The Oddfellows Hall building was eventually demolished as it was falling down.

Where did the name come from? Apparently most types of tradesmen belonged to guilds for mutual support and protection but those odd ones out who didn’t fit into those guilds made up a group of Odd Fellows – fellows were wage earners- hence the name.