You are here: Home>New contributions>Around the time of the 1953 coronation

Around the time of the 1953 coronation

Hilary Roadley from a variety of people's memories

What were older residents doing at the time of the Queen’s ascension to the throne Feb 1952 and coronation June 1953? A few remember that the Queen mother visited the Royal Agricultural Show in Trumpington in a field near where Scotsdales Garden Centre now is, and that a line of trees were planted on the Cambridge Rd in Trumpington in her honour- only a few remaining. She came without King George as he was unwell. When he died, most remember the present Queen Elizabeth was on a visit in Kenya and had to fly back. In particular, they remember her descending the steps of a plane on her return. 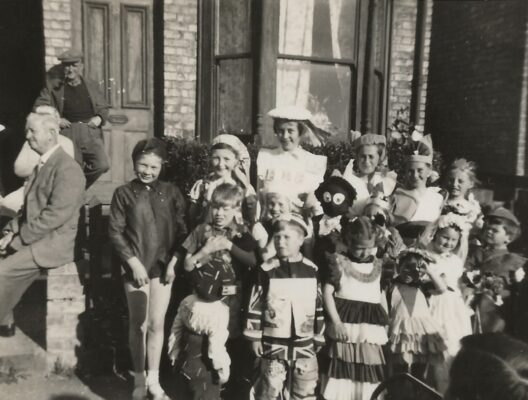 For the coronation most adults were given the day off work and children the day off school. Some took the opportunity to visit relatives – in particular those who were in the rare possession of a 9 inch TV! Family and friends were crammed into small rooms to watch the procession and service of thanksgiving at Westminster Abbey which was about 3 hours long. The Old English Gentleman and Coach & Horses had black & White TVs so some went there.

Apparently it rained for much of the Coronation day. The procession started in the morning and arrived at Westminster Abbey at 11am. The Queen went in a horse drawn gold coach which some remember being given a small model of later on. Everyone fell in love with the Queen of Tonga. She was a big lady and had the top of her coach open so she could fit in, despite the fact it was raining. Queen Elizabeth had about six Maids of Honour/Ladies in Waiting as the Coronation gown had a long train which they had to hold up. 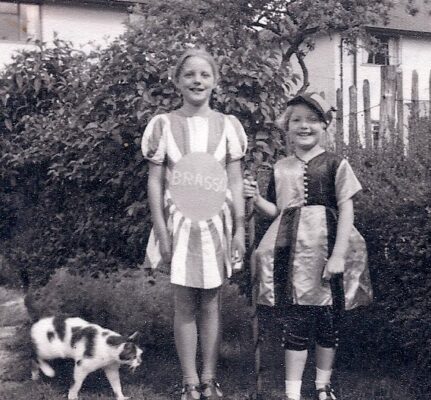 Most villages or various streets in Cambridge had street parties. In Harston coronation activities were based around Village Hall. There was a fancy dress parade/competition for school children. John Wicks won the first prize in the younger section, which if he remembers correctly was ten shillings. His entry was, The Pieman that Simple Simon met, and involved his three wheeled bicycle being dressed up like a pieman’s cart. He was in white and had a hat which was made by covering his father’s old army beret with floppy white cloth. A large white card was hooked on the back of the bicycle saying, Pies for sale. His older brother Peter won a prize in the senior section. His entry had him sitting on his bicycle, which had been converted into a baby’s crib, and he was dressed like a baby. Bottles and dummies were part of the baby scene.

Janet Hill (age 10) and sister Judith (age 6) in photo were dressed up ready for the competition and also decorated their bikes. Judges for the competitions included Mrs Hayes, a farmer’s wife, and maybe the Hurrells, as in Colonel Geoffrey Hurrell, J. There was some sort of event in the hall after the judging. There may have been a dance in the evening for adults. 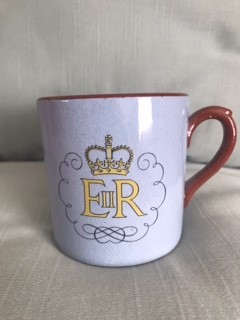 Coronation mug given to John Wick 1953

John Wicks said ‘we all had decorations on our houses, coronation crowns etc. and during the morning I think we watched the coronation on Les Boultons TV’.

All senior school children received a silver, maybe plated, spoon and younger ones received a bright blue Coronation Mug. The silver spoons were either in a red or blue box, with red or blue colour on the spoon, depending on which school house you were in – blue for Beech House and red for Oak house.