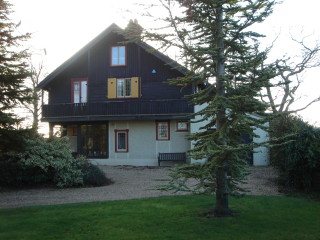 Sunbourn is on top of Newton hill- an unusual house design for the area. The land was acquired in 1924 by a Miss Signe Lavén, a Swedish physio who was very friendly with the Greene family in Harston House. The Greenes persuaded her to build locally and construction started on what is now the front part (modelled on an Austrian ski chalet of which Miss Laven was fond) with extensions in the thirties, and some additions in 1989. She named Sunbourn after the Swedish painter Carl Larson’s home ‘Sundbourn’.

In the 1920s Miss Lavén developed a friendship with Ethel John Lindgren (EJL), an American student who came from a Swedish-American family and who had a mutual interest in Sweden. After her 1927 graduation EJL led expeditions to study the remotely-located reindeer-breeding peoples in Manchuria. Coming to live in England in the early 1930s to continue her research studies at Cambridge EJL needed a home and Miss Lavén suggested she share living at Sunbourn. During the war Miss Laven moved to Cambridge and EJL to London so Sunbourn was let out to a Mr Ripper, who founded Pest Control at Hauxton.

After the war EJL married a Swede, Mikel Utsi, and after a spell lecturing at Cambridge, EJL and Utsi re-introduced reindeer back into Scotland, from where the animals had been hunted out of existence 800 years previously. Sometimes they would bring a reindeer to Sunbourn: many Harston schoolchildren in the 60s made their acquaintance.