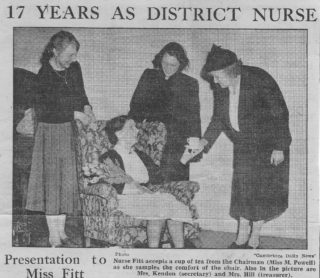 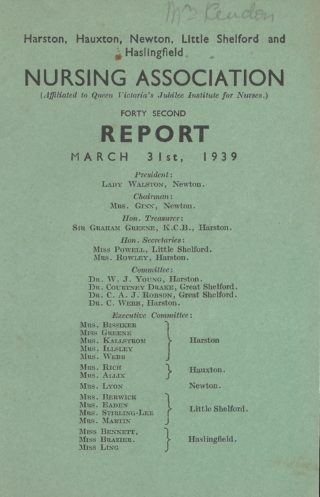 Although many older residents have memories of Nurse Fitt providing health care in Harston, I was amazed to discover from a 1936 Nursing Association booklet that she was then the only nurse that provided care for 6 villages in the Harston & District Nursing Association which had started in 1897. The villages were Harston, Hauxton, Haslingfield, Little Shelford, Newton and Harlton.

Joyce Carter (nee Pluck) said ‘Nurse Fitt lived on the left side after you enter Manor Close and all the children went to her with their cuts. She rode around on her bike visiting the villages but later got a car’. The latter was provided by the Nursing Association in 1936. They also provided equipment and uniform. Records show she made roughly over 3000 surgical, medical and maternity visits a year as well as school visits once a week with many follow up home visits (approx 1,500) including responding to enquiries about infectious diseases and school dental refusals. She also provided ante-natal care and looked after infant health. Nurse Fitt was the sole nurse for 17 years until her retirement; was this in 1950s?

Interestingly, as this was before the National Health Service existed, the Harston & District Nursing Association was run on donations and subscriptions; the former from the better off residents and the latter by any family who could afford the subscription of 4/- a year. The Association’s management and fund raising again relied on a committee of volunteer residents from each of the villages who held whist drives, sales and fetes, although it did get some help and funding from the County Nursing Association and County Council.

The Nursing Association committee decided in 1936 that an Infant Welfare Centre was needed and Mrs Ceilia Kendon was asked to act as Secretary/treasurer and skilfully ran it for many years. It met twice monthly, attended by the Nurse, in the Oddfellows Hall and mothers could attend free, have their babies weighed, with volunteers providing tea and biscuits in a relaxed atmosphere. There were monthly visits by the doctor, alternating with visiting speakers who talked on such topics as minor accidents, vitamins & food, weaning time, prevention of tuberculosis, vaccination, modern methods of child training and ante-natal care. In the 1940s, despite the extra war pressures, including evacuees, the Centre initiated many of the diphtheria vaccinations for local children and Nurse Fitt filled in over 600 milk forms. Volunteers manned a baby and infant supplies sales table, with Ostermilk, Cow & Gate, Virol & Dettol being the chief items, but Maltine, Minadex, food charts & Marmite were also available at special welfare prices. The Nursing Association had ceased to exist in 1949 when the Health Service came into effect but the volunteers were asked to continue with the Infant Welfare Centre. The Centre had met for 10 years in the Oddfellows Hall with no charge but when the latter was sold in 1946 they moved first to Newton Village Hall, then to Harston Village Hall in 1957 and the School in 1966.  With the Health Service reorganisation of 1974 volunteers decided the Infant Welfare Centre was no longer needed. I wonder then what clinic I took my baby to in 1983 in the Village Hall to have her weighed and meet the health visitor?