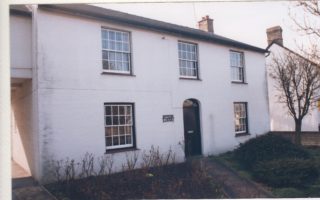 Margaret Louisa Mellor, nee Badcock, born 1911 Harston, was the daughter of John Richman Badcock, the village baker. She wrote the following memory: “My own house was Bath Cottage – the name given by the previous owners (now called Byron Lodge, Royston Rd). As my father was a baker we were fascinated to see the sacks of flour in the loft, and liked to climb up the ladder, then we could see the flour let down on a chute into the bakery. There was a stable which housed the horse, with which my father took round the bread. We used to like to go round in the cart with him to take bread. When you think that it was 6d a loaf in those days.”

A lady called ‘Aunt Daisy’, 102 in 2017, recalled that when her showman family set up the Fair on the Green in Harston in the 1930s she could remember the smell of the bread being baked at the nearby bakery. This must have been the bakery at 1 Church Street, then run by the Harrisons. In Kelly’s Directory for 1929 Percy James Harrison is listed as a grocer & baker and in 1948 he built a new bakehouse beside the cottage but nearer to Church Street than the original bakehouse. Albert Lawrance, son of a Harston blacksmith, delivered bread from the Church St bakery in the 1940s before going to university, his son Geoffrey recalls. Nigel Schoepp also remembers he went there on Saturday mornings to get a fresh loaf as his mum in 1950s bought their daily needs from the grocers there, initially run by the Harrisons, then by the Samuels. Betty Folbigg, nee Bass told us that her great grandfather Josiah Ashby had the bakery and grocer’s shop in Church Street from 1861 to his death in 1905. Initially being a tenant, he purchased the shop/bakery for £250 in the 1893 Harston House estate sale.

Andy Bowden recalls that when his father Frederick renovated one of the outbuildings (the old Oddfellows cottages) behind No 49 High St (Old Green Man pub) for the dairy’s cold store, a baker’s bread oven was discovered in it and was removed. This may have been the bakehouse run by Mr Peachy sometime after the pub had closed in 1907 when he moved it from No 53/55 High Street. It had gone by the 1940s. In 1851 census John Peachy age 29 was a journeyman baker living in the same High St household as Robert Reaves, 41, another baker. Both John Gwilliams and Jonathan Stockbridge were also grocers & bakers then, in High St.
Interestingly in November 1859 the Cambridge Chronicle & Journal advertised: To let, bakehouse and 15-bushel oven with chamber for 400-500 sacks of flour, and a dwelling house etc. Business carried on there for nearly 50 years, apply Thomas Jordan, Harston. I wonder which bakehouse this was?