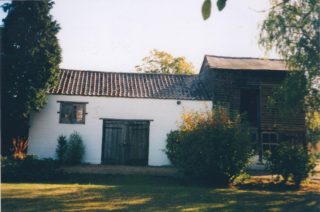 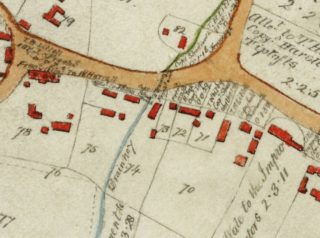 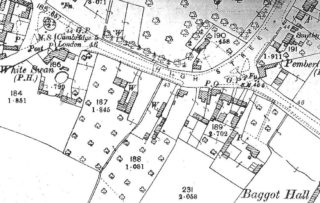 Although Roebourne, 11 Royston Rd was built in 1900 I was fascinated to discover that the pair of barns in the garden behind were much older and likely to have been there before 1802 when the Green land fronting the High Street was enclosed. Not only were the barns there but remnants of cottages’ foundations facing the barns were also discovered.

Royston and Station Road used to have a larger area of Green by the War Memorial which was divided up at Inclosure in 1802, as shown on the 1799 map. This gave the owners longer front gardens. Unlike in the High St which retained these long front gardens, the strips on Royston Rd had new houses built on them fronting the High Street (now named Royston Rd) as shown on 1901 map. The old buildings and barns behind them gradually disappeared.

A WI 1965 scrapbook revealed more about the Granary on Royston Rd. B D Threlfal who lived there wrote: We can trace it back through the deeds to about 1700, when, as a farm house, it was known as “The House at the Witch Tree”. The farm, an arable one, was held as a tenancy of the Shadworth Manor.

Its various tenants were all descendants of the William Atkins who held it c.1700. Though the farm’s fields seem to be lost, it was left with a “close of orchard land”. In 1910, the last descendant of the family, a widow, died and the property was auctioned. A copy of the auction particulars survives and it describes the buildings then on the site: two thatched cottages, one large, one small, the farm buildings, and “a well of water” (what else would it be?). The property was bought by T.R. Smith & Sons, the Harston family of millers, who held it for the next 54 years.

Both cottages have gone: the present three Granary cottages (Nos.15, 17 and 19 Royston Road) occupy the site of the larger cottage and presumably therefore of the old farmhouse. The farm buildings were converted to a granary for use in connection with the milling business and later into a residence by the Threlfals.

The White Swan Inn facing The (Swan) Green was burnt down in 1928 and replaced with housing.