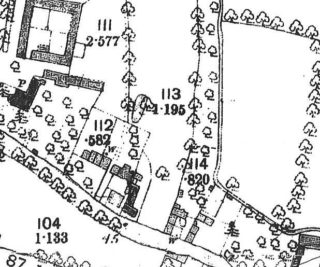 The 1886 O.S. map shows there were a number of small cottages either side of what is now The Footpath (113 on map). Pantile Cottage, 12 Church St , was originally two semis seen to the right of 114 plot and parallel to Church Street, but what happened to the two cottages in front of them, at right angles to the road?

Pantile cottage deeds reveal that 4 cottages were sold in 1893 to Mr David Harper, gardener of Barrington. In 1928 he sold them to Helen Greene of Harston House for £80 but she only sold two cottages to Bertie Cator in 1956 for £440, the front two having disappeared. By the 1983 sale the remaining two cottages had become one, Pantile Cottage, with more added on the back in 1984.

The deeds also revealed land to the west of Pantile Cottage was sold in 1925 by Jesus College to Chesterton Rural District Council for the erection of cottages for Part III of the Housing & Working Classes Act 1890, presumably to build the council houses of The Footpath. This land included the three cottages with gardens and adjoining paddock (114 on map). Mary Greene painted these as shown below with Pantile Cottage to the right. These 3 cottages had gone by the 1949 landuse map. Gerald Ives remembers that three families – Cox’s, Warrens and another- living in the Button End Council houses built around 1937 – all came from three old cottages next to The Footpath, parallel to the road. They were torn down as unfit dwellings. When did this happen?

112 on the map shows other labourers’ cottages, to the right of Beech Farm, that have gone. Can anyone remember these?