Until 1802 we had a large village green to the east and west of the High St that would have been as large as Barrington’s, if it hadn’t been divided up and enclosed by hedgerows. There was a large area of common land and moorland to the east – Moorfields cul-de-sac was named after it. New owners soon started to build on this land with only the pasture land known as The Park opposite Park House now remaining. On the west side the existing owners were allocated land which became their large front gardens that can be seen today. The Green extended down to Station Road and Royston Road and again most of the houses here were built after the land was enclosed in 1802. 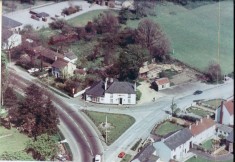 Two areas of Green remained- Swan Green and what became known as War Memorial Green. The latter was bounded on one side by the Pemberton Arms, on another by Badcock’s bakery in what is now Byron’s Lodge, with the old Post Office and Pask’s butcher’s shop a little further along Royston Road. Originally the Green had an artesian water source on it that the public could use, but no longer. The War Memorial was added in 1920 and was first looked after by local residents living nearby, then by the Scouts.

Swan Green was bounded on one side by the White Swan Inn (until it burnt down in 1928), on another by the Queen’s Head with Harston House facing on the northern side. Harston House was once called Thoroughfare Inn possibly before the ‘New House’ was built around 1700. This suggests this area was a busy stopping place for travellers that passed through along the north-south route and east west route that crossed here – probably why some sales documents referred to the area as The Cross. This area was once the old centre of the village and in addition to pubs had saddlers, cobblers and a bakery/general store. It was also the site of the Whit fair until the 1930s with swingboats and many booths spilling over onto the roads. 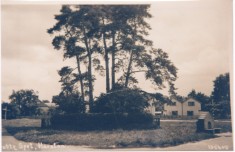 The Greene family owned Harston House from 1893-1952 and by 1920s owned many of the buildings around Swan Green and the Green itself, which they donated to the parish. They provided the artesian water source on the Green – you can see their initials there. There were originally a group of 5 conifer trees (shown in this 1930s photo) which locals said were called The 5 Sisters after the Greene sisters. A few survive.