We recently had a display in the Village Hall, then the Parish Church, on ‘Harston Women of note’. I would have liked to include Nora Sellen but could not do the research in time.

I do know that in the Nov 1979 parish magazine it stated that the village sign was unveiled on 13 October and that Nora Sellen’s two scrapbooks were on view. One of these, a very large and heavy scrap book, mostly produced around 1965, is now in the Cambridge Collection and is a treasure trove of information about the village and village people in the past. It not only contained old photos and newspaper cuttings but she had added comments to keep the reader updated as well as including the memories of people she interviewed or had asked to contribute.

“We thought nothing of cycling to Histon to play hockey. Mixed hockey too! It was very rough’. (Nora commented that the long skirts must have protected life & limb.) We cycled everywhere or I drove the pony and trap. A real high flyer. We went to Cambridge quite often or I took the children to parties wrapped up in their little hoods. I took about half an hour to get to Cambridge but Mr Hays got about much faster. He drove a high dog cart with a high stepping horse. We used to play a lot of tennis tournaments. Mr Hays’ serve was something to remember.

We really enjoyed ourselves. At Christmas we welcomed the carol singers down at the Mill and my father used to have a high pile of pennies which we were allowed to give out at the end. Then there were the Horkey Suppers after harvest and the children going round on Valentines Day and the ploughmen on Plough Monday coming cracking their whips. We were taught how to behave in those days, but of course there were some who kicked over the traces.”

Miss Ashby of Church St Harston wrote: In the days before the village was supplied with water by the Water Company, Harston was well known for its very good supply of spring water. There were in the village 10 fountains (which she named). Beautiful soft water was flowing from these springs continually, day and night, winter and summer.

Nora wrote about music in Harston, something she was personally very involved in. In 1965 she interviewed Mr Herbert Sharpe, then retired and living in Cambridge, as he reminisced about the golden era of Gilbert & Sullivan in Harston from 1926-39. This she said had followed on from the Harston & Newton Gee Society under the direction of Mr Harold Smith of the Mill.  In 1973 Nora said Harston still had a flourishing Choral Group which combined each spring with other village choirs to produce oratorio in the Guildhall, Cambridge or in Ely Cathedral, under the directions of Mr David Willcocks.  Our Harston parish magazines show that Nora organised an annual youth concert and an annual String orchestra concert from at least 1975 – 86. The Cambridge Collection also holds Margaret Singeon’s 1981-2 scrapbook of newpaper cuttings which included several programmes for the Harston Music Society. 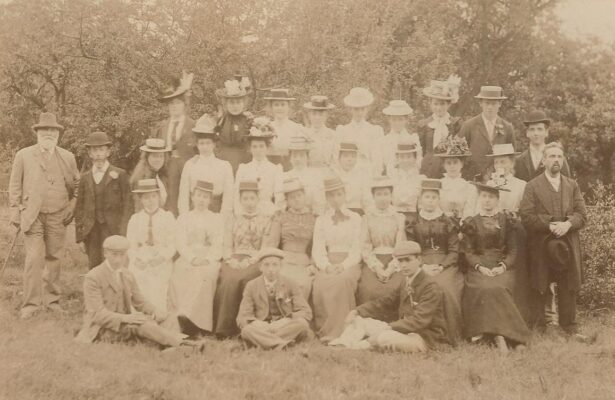 Two Sellen scrapbooks were mentioned and we assume the WI 1965 Scrapbook which the History Group holds was probably the other one. This was again focused on the village and its history. Our last display ‘Through the eyes of Harston artists’ showed four artists who had contributed pictures to this scrapbook; Nora’s husband Cyril, an architect, being one of them. He largely focussed on Button End where they lived. In this scrapbook Nora again mentions the past 8 years oratorio that had taken place and gave a long list of the singers. Included also is valuable information and photos on the history of 37 Church St, The Granary on Royston Rd & other places.

This scrapbook has interesting accounts of village life written by people who had moved into the village – particularly from towns or cities and noticed the difference – more friendly but less conveniences. One lovely account tells of the local elderly people met when taking around meals on wheels, while others tell of the over 60s club. One of its members, Mr George Willers who lived in the old wheelwrights on High St donated some old photos for the scrapbook – one in particular of a large Harston Baptist Chapel Bible Class around 1900s. Other accounts tell of fungi and bird life found in Button End or Harston. The Headteacher then, Peter Shoote, wrote about the Rookery where the birds roosted every year over a large part of Mr Hurrell’s plantation.

If you have an old scrapbook or photos of Harston’s past we would love to see them. We would appreciate anything more you can tell us about Nora Sellen. We welcome anyone who is interested in doing any research of people, places or topics