During lockdown we had a request from someone researching their Hatley family ancestors. They knew they were blacksmiths in Harston but wanted to know where they lived and where the smithy was.

We already knew from the research of Manorial records by previous owners that the Hatleys lived at Fountain Cottage (Farm originally) from around 1630 to 1748 and that the first Henry Hatley probably built it around 1620-30. There is no mention of the Smithy being there, though.

From parish birth & death records we know that Henry’s great grandson George Hatley (1717-1786) was a blacksmith when he died and George’s younger son Thomas was blacksmith at least from 1813-21 in Harston. When we looked at the 1799 Inclosure map we found that Thomas owned a strip of land (once an orchard, now Pightle Close) that ran from behind Fountain Farm eastwards towards The Green, and included the buildings from the Queen’s Head to Hurrells Row. Thomas’s oldest son George (1796 -1860) was blacksmith from at least 1825-53 while younger son Thomas was a harness maker in 1841, probably where Saddlers Cottage is (No 44 Royston Rd).

Where was the smithy? We do know that when Hurrells Row was sold in 1910 there were 12 cottages and blacksmiths buildings – so the smithy was probably somewhere behind the saddlers and behind Hurrells Row. I wonder if anyone has ever found any old evidence of this – horseshoes, etc.

An 1860 December newspaper confirmed this location: auction at The White Swan;

An 1842 December newspaper sale also stated: To let at Harston, house, shop, Blacksmith’s shop, small garden, opposite the Swan Inn.  Occupied for many years by George Hatley, the latest occupant being William How, shoemaker.

This location was also confirmed by an auction advert in 1849 April Cambridge Independent Press: 2 houses, orchard and Home-Close in Harston. To be sold at the Swan Inn on May 8 in one lot. All premises are occupied by Mr J Northfield, comprising a good tiled house with large yard in front and garden at back, and another house, slated and occupied by Hatley, with garden at front, and another at back, plus Stable + Blacksmith’s Shop, with excellent Orchard behind, opening onto 2.,5 acres of Pasture Land in occupation of Mr Jacob Wisby. 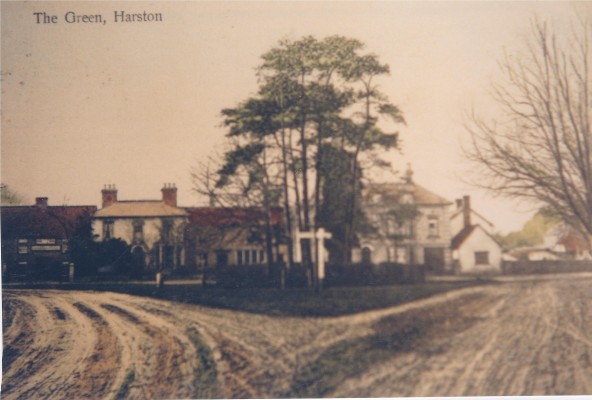 Both 40 and 46 Royston Road have slated roofs so we are unsure which one Hatley lived in. We do know that Christopher Wedd, a saddler had bought this line of properties facing The Green and moved in before the 1851 census and we also know that George Hatley was last recorded as Harston blacksmith in Kelly’s directory in 1853 and he moved to Duxford not long after. The Lawrance blacksmith family had moved into the village by 1858 (Kelly’s Directory) and had a smithy on the High Street. The saddlers remained in the building with the large windows facing the Green until the 1920s as shown in the photo.