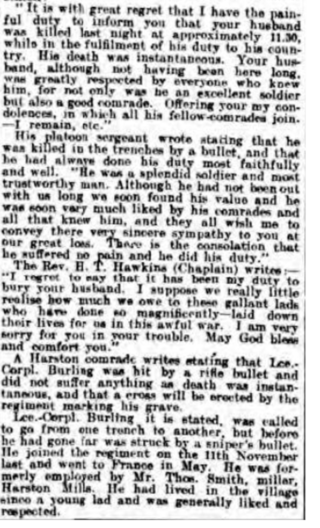 John was born in the Chesterton Union workhouse in 1889 where his grandparents, unmarried mother, his brother and sister also lived. He was moved from the workhouse to live with the George family in High Street, Hauxton and was baptised at Hauxton on 15 Dec 1896.

By 1911 he was living with the Harding family in Lawn Cottage, Harston and working as a miller’s carter at Thomas Smith’s Harston Mill.

He married Kate Churchman, daughter of Pemberton Arms landlord, Owen, at Harston church on 24 March 1913. The entry in the the parish records under groom’s father’s name reads  ‘Father & Mother & Guardian & relations utterly unknown – brought up since 12 yrs old by John Harding.’ His wedding was reported in the Cambridge Independent Press on 28 March and the same paper, on 13 June 1913 recorded his appearance in the Harston quoits team which beat Shelford.

He joined the Cambridgeshire Regiment in November 1915 and went to France in May. He was killed in the trenches near Festubert on 18 July 1916 by a single sniper’s bullet.

Below is a summary of the sort of action he would have been involved in when killed, based on http://www.cambridgeshireregiment1914-18.co.uk/may-august-1916.html

The Cambridgeshire were still in the Givenchy sector on 1st July when the big offensive started further south with massive British casualties. The Cambridgeshires left Ferme du Bois for a short rest, before returning on 4th July. A week later they moved back to billets around Vielle Chapelle and then Le Preol. On 14th July they returned to the front line around the village of Festubert. During July various diversionary attacks and raids were taking place in the area trying to draw some attention away from the Somme Offensive. Regular patrols to check German dispositions continued as did daily casualties.

The Cambridge Independent Press of 28 July 1916 reported his death and carried a copy of the above letter written to his wife by his platoon officer .

He is buried in Gorre British & Indian Cemetery, Pas de Calais, France, grave II B 11. His wife requested the inscription on the gravestone should read ‘Our life together was perfect love reigned supreme.’